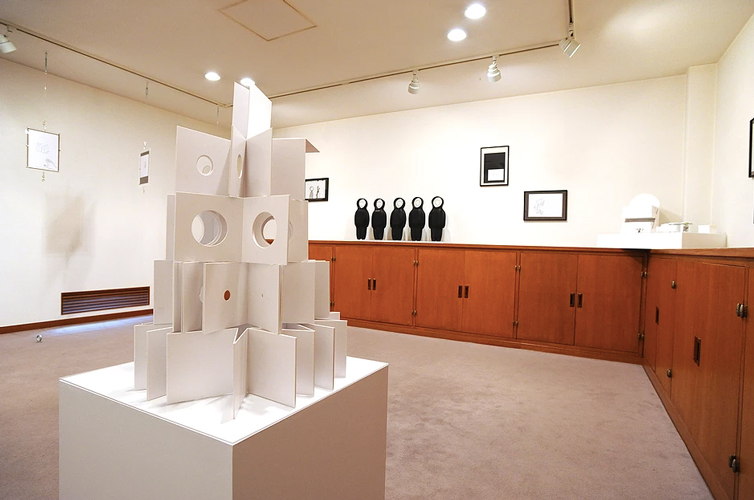 From November 30th  to December 14th, Kouichi Fine Arts presents the exhibition of Noriko Yamamoto, an artist based in Bremen, Germany.

An Osaka native, Yamamoto enrolled in University of the Arts Bremen in 2004, and after graduating in 2010 spent one year earning a master’s degree. Her graduation project won an award for highest excellence, and as an extra honor was displayed at Delmenhorst Private Art Museum in February of this year.

This exhibit and one held in January constitute a two-part series in which the works are featured in a reimported fashion.

A hundred square plates constitute a structure like an advertising column. While each of the plates appear to be separate and individual, the sides of each square match, combining to form the surface of one larger square, and when folded up they form a cube. Furthermore, 50 of the 100 plates have a round shape cut out of their centers, so when the cube is formed a spherical space appears within it. However, this cannot be confirmed from the outside. Not only does this objet represent a self-standing piece, the construction process has been filmed from above, and this film also constitutes a work of art.

It could be said that Noriko Yamamoto’s body of work takes as its point of departure the Buddhist fable “The Blind Men and the Elephant”.

Along these lines, these intriguing pieces at a glance appear to be in a state of completion but actually then transform in various shapes… At a glance seeming to be fine, delicate figures, Noriko Yamamoto’s creations are high-quality masterpieces that also demonstrate a sense of  stability based on physical calculations.

Invited last month to the Seventh Tashkent Biennale (in the Republic of Uzbekistan), Yamamoto is also scheduled to exhibit her work in May of next year at Art Messe,  kunstfrühling 2014, the latest installment of Bremen’s triannual event.

We would greatly appreciate if you take time from your busy schedules and experience these special works of art.